Wow, setting up a company is a lot of work. More than I remember from last time I did it (fourteen years ago!) but I'm getting there. All the admin has had a substantial impact on development of my first game, so progress is slow. I have also neglected to tell you about the game I'm making, which is remiss of me. That changes now.

My first game is called Bubble Pack. It is a physics game - how many bubbles can you pack into the screen. You launch each bubble to bounce around the screen, and when it stops it expands until it touches the side wall or another bubble. You have to pack as many bubbles into the screen space as you can.

It is a fun little mobile game. I'm not wedded to mobile for all my games but it feels right for a casual game like this, and touch works well for the interface. I'm building it in Unity and I hope to publish it for iOS, Android and Windows Phone.

I will keep the game to three screens - the game itself, the in-game pause screen, and the pre/post game screen. The original wireframes that I created look like this 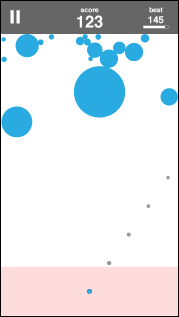 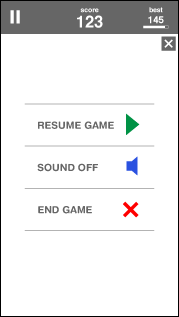 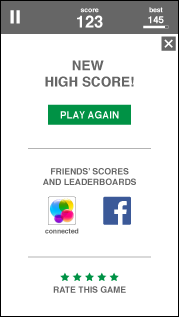 I'm intending to integrate friends' scores deep into the game. The target in the top right corner, which in the wireframe shows your best score, will switch between your best score and different friends' scores as you approach and pass them, along with some standard goals for players who don't have friends. :-(

This is deliberately a straightforward game to build. The goal with this first game is not to build big but to build well and learn lessons.

In January I built a small prototype to test the mechanic and I enjoy playing it. Here's a short video of the prototype.

The gameplay is engaging but not highly addictive. I expect many players will play for a few days then move on, but I hope the social elements will encourage them to introduce it to others and maybe I can get a small snowball rolling.

So, that's the start point. I'll post more over the next couple of weeks to bring you up to date on the development.

Also in the collection Freak Factory