I have been playing around with the gameplay for Bubble Pack, adjusting it to get the right difficulty balance. There are lots of small adjustments that can be made to make the game a little easier or a little harder and I also tried a couple of bigger changes.

First I tried letting the player set the power at which the ball is thrown. Unfortunately, this made the game far too easy whilst also making the controls more complicated, so I ditched that idea.

I also tried removing each bubble after a period of time. The lifespans of bubbles got longer as the game progressed, starting at fifteen moves for the first bubble. So after it had been in play for fifteen moves, the first bubble would pop, opening up more space in the game area for other bubbles. Because the lifespan increased during the course of the game, the game got harder and harder.

This meant it was possible to recover from a bad mistake early in the game, but it also made the early part of the game boring for good players because the bubbles you placed then would be gone later in the game so didn't really matter. So I dropped this idea too and returned to the pure game.

But I did make a lot of smaller adjustments.

I tweaked the power of the shot until it gives the player lots of interesting options. 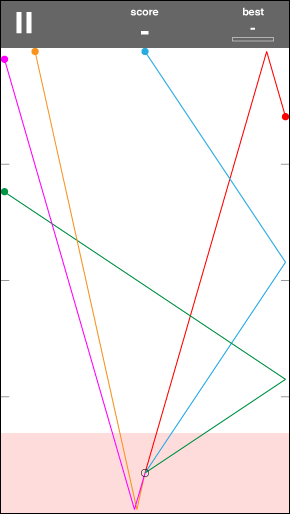 I can think of a number of strategies to try to get a high score and I'm unsure which will be the best, and that's good.

I added markers around the edge of the play area to help the player with targeting.

I made the direction targeting for the bubble into a line to make it clearer (some testers were confused that the dots indicated the size of the bubble when in fact they were much smaller).

I also added a second line indicating the direction of the previous shot, which makes planning your shot based on what happened last time a lot easier. 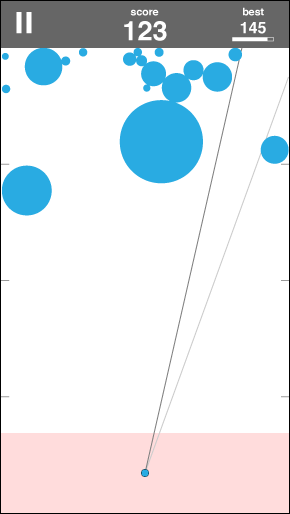 These small changes make it a little easier for a beginner player to improve, but to get a great score still requires good spatial planning and reasoning.

When playing the game the control rests squarely with the player. There is no randomness or erratic behaviour in the game to ruin your plans. When you succeed it is your success and when you fail it is your mistake, which leaves every player thinking they can do better next time.

My best score so far is 62. My scores are quite erratic ranging from about 30 to the aforementioned 62 - it's easy to make a mistake and ruin your well laid plans. :twisted:

Also in the collection Freak Factory