An experimental interactive dance project, released on CD-ROM, in which viewers can play with the dance, creating it, changing it, playing with it. Is it a dance or a game? You decide. Read more about the project here. 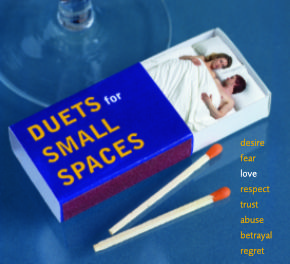 A project to create a dance that can be performed on small stages in intimate venues. This was a full-evening of duets about relationships, the good and the bad, featuring joy and tears, love and abuse, give and take. The most personal project I’ve made and the last stage dance (so far). Read more about the project here.

An experimental gallery installation with a live dancer, a CGI generated and AI controlled alien creature, real-time motion capture so the creature can “see” the dancer, and music generated from the movement of both the dancer and the creature. We were continually developing the project over a period of 18 months and performed it in various venues in the UK and mainland Europe. Read more about the project here. 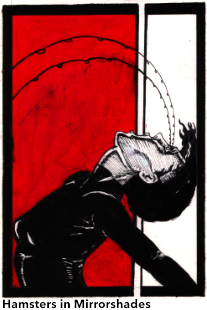 Dance meets cyberpunk in this evening of dance, again performed at The Place Theatre, inspired by cyberpunk literature. It was dark and playful, harsh and unforgiving, and not as well received as my other work. Never mind.

A project to create a dance about genetic diversity and the environment. After a research period of a month at The Place Choreodrome we were ready to create the dance but it was an expensive project and we were unable to get the funding together. This project had possibly the most interesting choreography I have ever done and I’m still upset that we never got to finish it.

An evening of three dance pieces presented at The Place Theatre. I was feeling mischievous so the works were made under unusual restrictions. In the first, called Strollin’, the dancers’ feet are nailed to the ground so they can’t move but still they manage to dance together. In the second, called Lost, the lights are kept off so the audience can’t see the dancers, but they can hear them. The third was a restaging of “Crab Canon”, the strict retrograde canon I choreographed in 1991.

A set of three experimental short interactive dances created for viewing on the web. They used old technology and don’t work on the modern web, sorry. But what I learnt from them influenced the creation of Waterfall many years later. 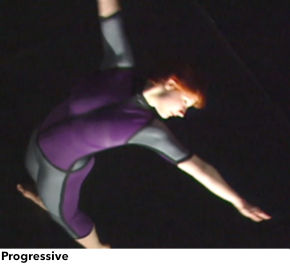 A dance video I created with one performer and lots of editing. Based on some of the ideas I presented two years earlier in my final year thesis on creating dance for television. I choreographed, directed and edited the project, and sold my car to pay for it. You can see the video here.

A project to present The Rite Of Spring in a new format, performed by six pianos and twelve dancers in a modern story of life and nature inspired by the original ballet. The music was being transcribed for performance by six pianos and we were well on our way until we stumbled over music performance rights.

Following on from the previous year, a smaller group and fewer and longer dance pieces. This evening again included two works that I choreographed, Underwater Sunlight, a work for three dancers inspired by how dolphins move and how their societies work, and Dance of Words, a collection of duets performed to a set of recited poems by Neil Barnett.

An evening of dance presented at The Place Theatre in London consisting of a number of short works, created with some of my friends from my dance school days. The evening included two works that I choreographed called Crab Canon, a tightly structured retrograde canon for two dancers, and Spirits, a free flowing work for five dancers about life and love.